Stancejerks. No Bueno.
"Play stupid games, win stupid prizes."
Dangerous, Poor Taste, Inconsiderate, Abusive, Expensive
Why stancing is a lifestyle that has to go and what you can do about it. 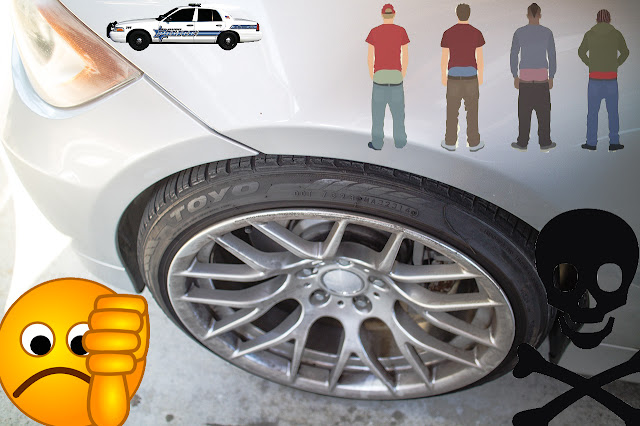 in the front with undersized tires AND spacers with STOCK lug bolts. It has 19x10s in the rear too but they fit fine. I remedied these by purchasing new AG M359

2 Tires.  These wheels were barely holding on by 3 or 4 threads of the wheel bolt due to using spacers with stock bolts.  WOW.   You know the saying birds of a feather flock together?  Well this stancebird had with it many maintenance and upgrade no-nos, it doesn't surprise me that someone with enough disregard to safety to use stock BMW wheel bolts

would install spacers just to get that aggressive look.  Now I use the term stancing here loosely for this particular case. This isn't the typical stance-slam, but it's a variation of it.  Pushed out wheels to the limits, forcing on thin small tires to clear the fenders etc.  Thankfully this car wasn't slammed.

Stancing is a modern-day phenomenon which has its roots to the 80s low-rider era in Southern California where gangsters up and down the state from LA to the Bay Area would slam their impalas and put the widest wheels possible with the most stretch possible as to allow fender clearance due to their oversized wheels.  At least in those days, these gangsters cared about their Impalas as their prized possessions.  Immaculate car art, paintwork, body work, interiors.  They had pride. 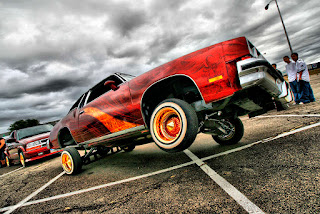 Pic I found on Google

Today? Well stancing has taken a hold of import Japanese and European cars. 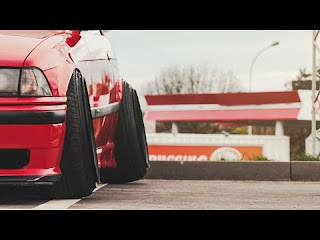 Pic I found on google by searching for stancing

You can't go anywhere, Elmer.  The whole point of a car is to GO places.  Stancing means you use larger than intended wheels and driving around 5mph and a half mile an hour over speed bumps and dips causing delays in traffic.  Using large wheels means you can't fit the proper size tire.  So what do you do? You use a smaller tire!  What this does is puts additional stresses on an already-sensitive low-profile wheel/tire combination.

The following are symptoms of stancing:

This E90 came to me with popped and twisted fenders from the wheels striking the fender over bumps.  The front bumper popped out and was sagging and hanging.  I carefully molded the steel fender tab/mount back to shape and used a zip-tie (temporarily) to secure the bumper.  Thanks to stancing, Elmer screwed up a once $45,000 luxury car and nearly turned it into a rolling trash heap. Stop it, Elmer!  Also people who stance their cars often jerk their fenders off with rollers so they can fit their oversized Pepboy wheels and generic tires--this results in paint cracking, waviness, unevenness, and general poor taste rusted out beat up body work.  Good luck if you ever plan to sell your car.

So you purchase the Ultimate Driving Machine or (your brand equivalent sporty car) and then stance it? Why?  That's like buying an expensive camera then rubbing peanut butter on the front of the lens.  How does stancing ruin handling? Well first of all, stancing means oversized wheels resulting in heavier wheels and then...typically doubly HEAVIER than that due to being generic wheels.  You just got double heavied.  This does wonders for response and agility.  And not the good kind!  Then you have lowered contact patch due to the tires being undersized both in width AND diameter AND being tilted w/ negative camber due to the ALIGNMENT that's required to clear the fenders.  So you have a THIN, NARROW, and TILTED and sometimes GENERIC tire rolling down the road at 80mph.

By stancing, you are endangering yourself and others.  Your now crappy thin and small tires stretched on heavy wheels are not only severely reduced in traction and response, the additional load and stress on the tire means its extra VULNERABLE TO IMPACTS causing risk of BUBBLING and, TIRE SHREDDING BY RUBBING THE FENDER, AND EXTREME BLOWOUTS!  People also tend to install spacers without using the proper extended wheel bolts. By doing all the above and more, you've risked peoples safety and livelihoods all cause you wanted to sag your pants by hardparking at the next car meet.  Hardparking is when you try to look extra bad ass as all the dudes look at you as you park your slammer car next to other slammer cars. Also usually accompanied by cheap generic coilovers which presents its own set of problems.  Stop slamming, Elmer! 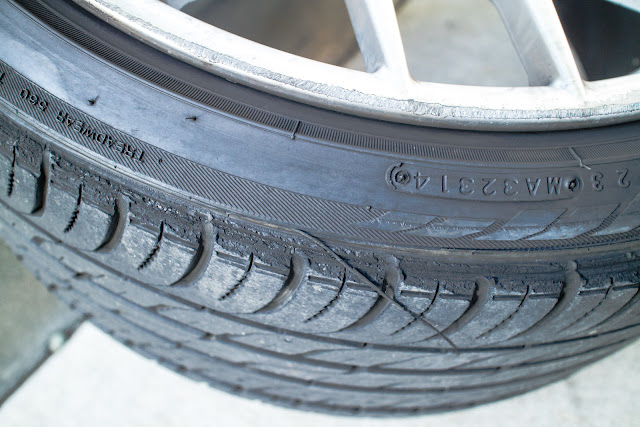 Shredded tire due to fender rubbing.  The E90 fender has a knife edge void of factory paint due to rubbing.  The result is a shredded tire.  Stance your car? It's like taking a knife to your tires while hanging out the window at 90 mph. Like that prison execution knifing scene in Breaking Bad. Is that what you really want? 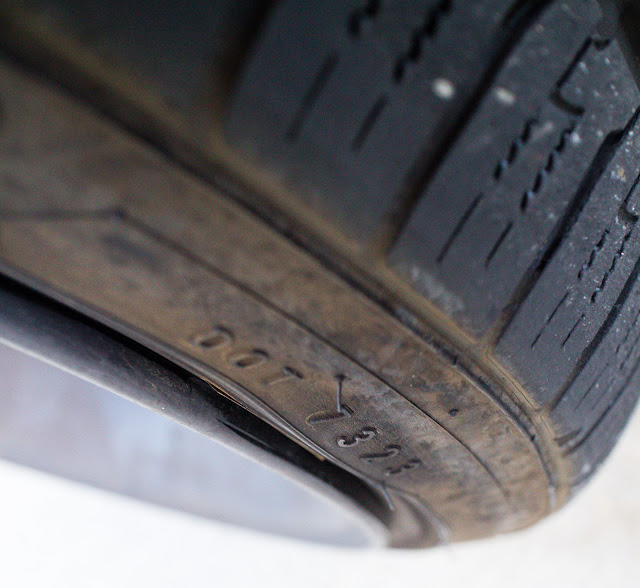 This was the "best" of the bubbles.  The other tire had 3 bubbles more severe than this. It was getting late and got lazy to take additional photos.  Just wanted to finish.   Your stancing and popping pushes the sidewall to the limit as it's now stretched beyond its intended function.  Making it even more vulnerable to sidewall separation and air leakage.  Imagine jabbing a properly sized tire with a butter knife.  Now stretch that same tire over a larger wheel and jab it again.  The tire is stretched and stressed beyond its intended limit while having to cope with road forces and impacts.  Yes this can happen to correctly sized tires or even new defective tires but stretching your tires isn't helping this. These conditions many times lead to bubbles that will eventually grow causing your tire to blow out at 90 mph on the highway potentially crossing the center divider risking an accident with a 35,000 lb loaded 18-wheel rig.  Are you a stancer? Check the inside of your tires NOW.  Bubbles are likely hiding where you can't see them.

There's already a dashcam video of a stanced Lexus circulating the internet where the car was doing nothing but going in a straight line and a slight bump sent it spinning out of control into oncoming traffic. This was due to the drastically reduced contact patch. Don't do it, Elmer. Safety first. 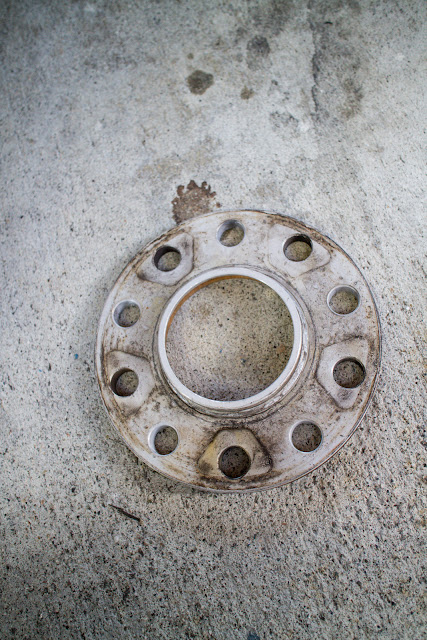 with your BMW wheel spacers.

Even if all the above wasn't an issue, it's just ugly.  You may as well pull your upper lip up and walk around showing your teeth. That or sagging your pants extremely low.  The whole point of a BMW is to perform.  Stancing goes against everything performance to compromise for perceived looks.  I have news for you Elmer, it looks like crap. 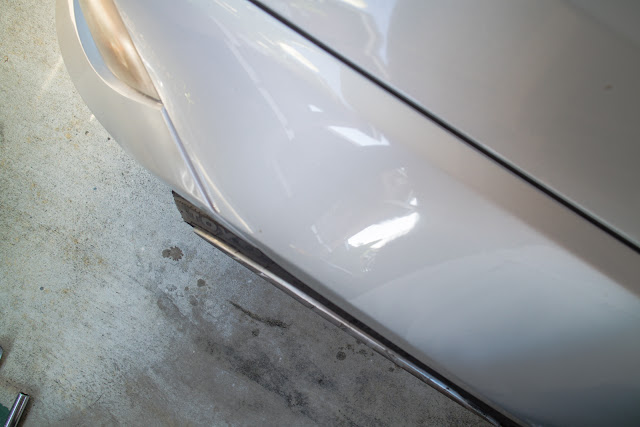 Wow.  Look how far it's sticking out. That's causing unnecessary drag and turbulence increasing fuel consumption and robbing horsepower. Unlike you, your car cannot gain this power back with your Monster energy drinks.

Here's the after-shots with 19x9s in front with 235/35/19 tires and 19x10s in rear with 265/35/19 tires (I plan to install a fresh set of tires on those soon) I also removed the spacers.  Now the wheel bolts have enough thread engagement to be safe. This car has many more projects to complete.  I've fixed the cigarette lighter, the sagging bumper that popped due to the stance, and other misc. odds and ends.  This car will get the Mango touch!  Oh the BMS 335i cone filters are BLACK.  The headlights and sidemarkers

are faded. Sadly, there is no lens (that I know of) offered for Xenon E90 pre-lci sedan.  Sigh. 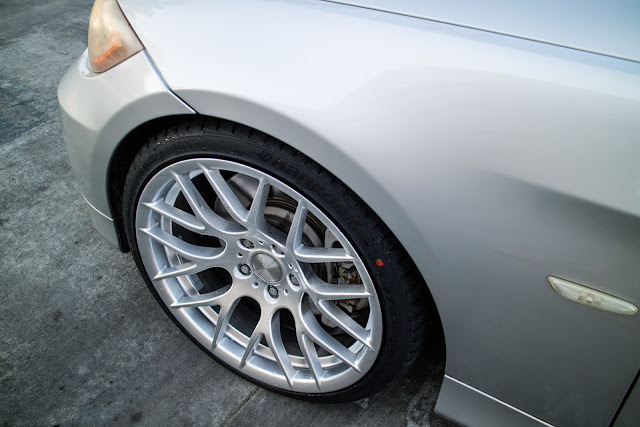 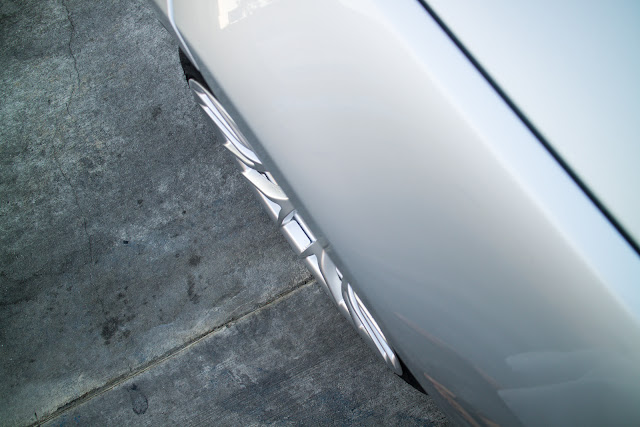 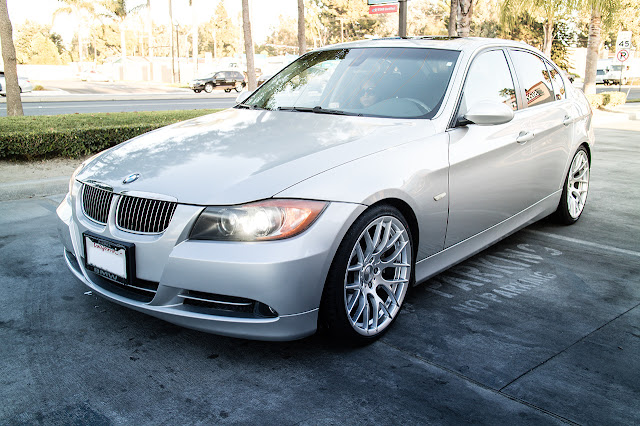 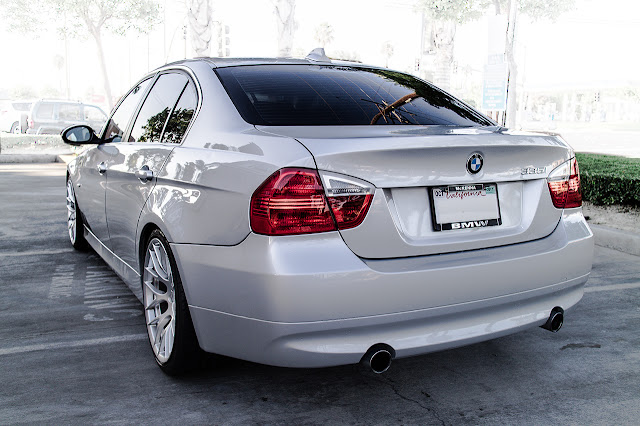 E90 335i fixed with correct sized front wheels and new correct size tires. You see that inch or so of gap between the fender and the tire's edge? That's the professional look you want.  Anything more aggressive and it's obvious you're trying too hard to be aggressive and have deviated far from the factory setup.  Too much of anything is bad. This has a classy, high quality performance balanced look.

I realize a lot of stancers like Elmer are really nice guys and I mean no disrespect to anyone but this is an issue that really bugs me especially when these actions really compromise safety. This car had so many safety issues due to oversizing the front wheels, it boggles my mind.  A lot of people blindly stance, slam, stretch their cars on oversized wheels, undersized tires, and cheap coilovers without thinking. This post hopefully will get people to think before they modify their cars and risk others.  Be safe!
Posted by E46Mango at 11:41 PM